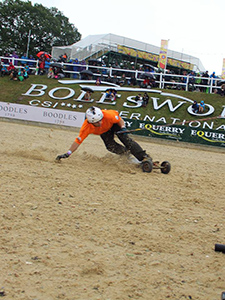 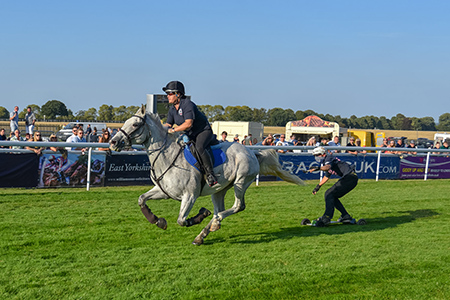 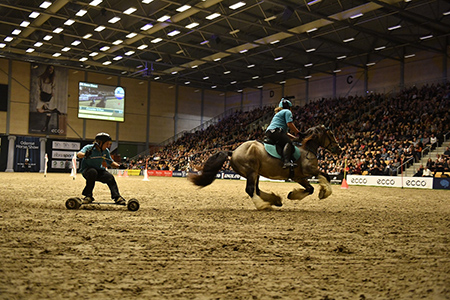 A fast and furious combination of snowboarding and horsemanship, is soon to appear on Horse and Country and other worldwide networks, displayed by some of the best horse boarders in the world.

With the best horsemen, one in a customised saddle and one on the board, a fast, agile and thinking horse, and an international commentary team, they will take your audience to the edge of their seats, on a white knuckle ride of relentless entertainment featuring galloping horses, board riders and 0.01 second differences.

Available in formats from 15 mins to 60 mins twice a day. The show starts with a short introduction to the display which takes place during the 5 minute set up time. Then, all the horses and board riders do a short carousel giving the audience the chance to pick their favourite team before the racing starts. Once the racing starts we run a race every 1.5 to 2 minutes. Barely giving the crowd time to recover from the spectacular previous race before the next starts.

Voted ‘the sixth most extreme adventure sport in the world’ by Travel Supermarket The two commentators keep the crowd up to speed as the leader board changes throughout the show giving the times of each partnership as they cross the line and updating the scoreboard to keep the contestants and audience fully up to date with the split second timings.

Teams race around a twisting, turning course in the fastest time possible while reaching speeds of up to 30mph into the first turn. Each team gets three attempts at the course with only the fastest time counting so the real question is... How fast can they go? Probably faster than you think.

The team is made up of three brains that must think as one if they are to win the race – horse, rider and boarder. With finishing margins often less than 0.5 seconds, there is no room for mistakes.

Weather – can be performed in almost any weather/ arena conditions.